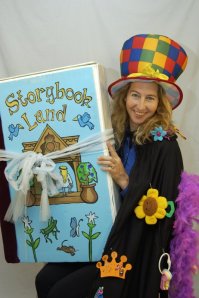 The Journey has begun…

Blessed art thou, the Karate Sensei who told me that I should just go ahead and do my shows in his Karate Studio.  www.mbkarateandyoga.com He is also the guy who told me many years ago, “you do the best that you can do, with what you’ve got.”  This was when I was attempting to do karate kicks whilst holding two year old Olivia on one arm.  A crawling 9 month old Tallulah was trying to cling to my leg as I attempted to complete a Karate kick whilst avoiding kicking my son, Dash, with whom I was trying to bond and the only reason I had taken up Karate in the first place.

Ah those halcyon days… why did I ever think that those were the difficult times?  I must have sent out over 300-400 emails advertising these shows.  I approached all the very kind pre-school and elementary school principles and librarians, teachers and friends, who have provided so much encouragement and support over the last few years.  I handed out a few hundred flyers to people around my local school, including the all important local nanny network who hang out on the greenbelt close to my house.  All of this work and anxiety to merely sell 30 tickets per show.

Show #1… I sold 10 tickets!  Now on my behalf, it was the first weekend of baseball season and the St. Patrick’s Day parade.  Still… only ten tickets!

I had known going into that Saturday morning, that perhaps I had some learning to do in the marketing department.  I was  still bummed that so few people were showing up to the premiere show.

Holy Flying Guacamole!  They were the greatest ten people to ever participate in a show.  We took on the challenge of going to the Land of Imagination with verve and vigor.  When we galloped into an alternative universe on our magical horses, we flew there through a splash of color and camaraderie with fairies, dragons, Cinderella and even a cannon that shot out kids.  We met Charlotte, the spider from Charlotte’s Web.  She joined the audience – we needed her, she made 11.  One of our kids could describe Hansel and Gretel’s house so clearly, that we were all salivating to try some of the sparkling gingerbread.  But we knew the witch was really inside waiting for her chance to jump us.  The kids could talk all kinds of animal languages, my favorite being the Human Language where the mom spoke Blah, Blah, Blah all day.

I feel invigorated and joyful that I had the chance to entertain and be entertained by those magical children.  The journey has begun with small but magical steps.  I look forward to Ms. Bits N’ Bobs – Take #2 this weekend.  Naturally, I would love to share the adventure with you.

2 Replies to “The Journey has Begun…”